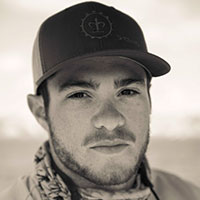 Born and raised on the shores of Long Island Sound, John grew up fishing for Striped Bass and Bluefish. Staring in 2007, he worked in at his local fishing shop where he taught fly-casting instruction, tied flies, and began shore guiding in Saltwater. John attended the University of Vermont where he was the President of the UVM Fly Fishing Club and cultivated a passion for freshwater fishing. John came to Alaska for the first time in 2013 on an August Goodnews River trip and instantly fell in love with the fishery. John earned his USCG Captains License in 2012 and began guiding during the summers in the Norwalk Islands on his 25’ Center Console. He now guides in Connecticut during the shoulder seasons when he is not guiding elsewhere in the country. In 2013, John became an Ambassador for the American Museum of Fly Fishing in Manchester, VT. From 2013- 2016 John worked to build Fly Reel a manufacturing company as a product specialist and sales representative. John has been a contributing author for Anglers Journal since 2014 and his published works cover a wide range of fishing adventures. John began guiding Fly Fishing float trips for Alaska’s Wild River Guides in 2014 where he now serves as the Owner/General Manager. In 2017 & 2018 , John was a guide and head of social media operations for the Bighorn Angler in SE Montana. His love for the Bristol bay waters brought him to become a Guide ambassador for Save Bristol Bay as a part of the opposition to the proposed “Pebble Mine.” John has worn many different hats in the fishing industry but he finds his sense of home chasing fish with a fly rod in the saltwater or exploring the Alaskan Bush.